Allstate Insurance Company, the corporate sponsor for the 2013 Sugar Bowl, graced the Lower Ninth Ward with its presence once again on Wednesday, January 2nd.

According to a WDSU News report, fans and players from the Allstate Sugar Bowl “met up to clean the blighted and overgrown lots in the Lower Ninth Ward.”

When I was here two years ago, Allstate sent (upwards of 500) actual company employees along with fans and players to the Lower Ninth for a day of clean up and festivities in honor of the Sugar Bowl. I remember a marching band, a mobile stereo, a speaker’s podium, matching shirts and plenty of back patting.

While the Sugar Bowl volunteers undoubtedly had the Lower Ninth Ward in their hearts (as WDSU asserts), it’s hard to ignore the Allstate logos peppered throughout their gear and warm clothing.

As you may know, Allstate has had a contentious relationship with the Lower Ninth Ward, especially after the corporation fraudulently denied claims from Gulf Coast residents whose homes were destroyed in Katrina’s aftermath. Since Katrina, Allstate has been involved with numerous lawsuits, and in some cases fined millions of dollars, regarding arbitrary policies and illegal refusals during the claims process.

With a broader context in mind, is the Allstate Sugar Bowl “Day of Service” merely a way to repair a damaged image in the eyes of New Orleans (and Lower Ninth) residents? With the amount of money it takes to send all of these volunteers to the Lower Ninth each year, (not to mention the matching shirts, entertainment and media coverage), all for half a day of trash clean-up, it would appear as though the insurance company is more interested in a photo-op “quick fix” than a serious commitment to repairing the damage it has done in this community.

Late last night we welcomed a new member to the Living Museum team! Tali Petschek, an extraordinary artist and former Oxy student, will be joining us until the 10th to begin planning the Katrina sculpture she is contributing to the Museum. This is her first time back to New Orleans since coming down to gut houses with Professor Heldman’s Disaster Politics class in 2007. 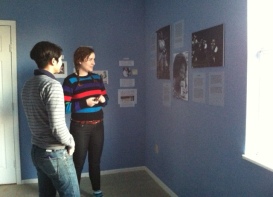 Tali describes herself as an artist interested in ideas of loss, transition and growth. If it were possible to find the space between the shadow and the floor, this is where her work exists. She earned her BFA from California College of the Arts and continues to live and work in Oakland.  Most recently she worked with San Francisco artist Michael Swaine building a fire pit and sun dial for Pie Ranch in Pescadero CA, as well as submitted works to The Memory Library, an online gallery of work curated by artist Brandon Jones.

Today we took her on her first tour of the Living Museum to begin planning for the installation  which she hopes will give a visceral experience of being in a room covered in mold and in the process of rebuilding. The installation will be in the museum side Kitchen, and will lead into the Katrina room. Her intention is to honor the strength that comes with facing loss.

We’re very lucky to have her here with us!

P.S. (After getting permission from his mother) Jeffrey would like the world to see the beautiful puzzle he has finished. It’s been an all-around productive day at the Living Museum!

Finding healthy foods in the Lower Ninth Ward is more than just a challenge – it’s nearly impossible. According to the U.S. Department of Agriculture (USDA), the Lower Ninth Ward is considered a “Food Desert,” meaning it has a population of 500 or more people who don’t have access to a grocery store within a mile from their homes.

Photo from the USDA “Food Desert” Locator – the red dot is the Living Museum!

On October 20th, in association with National Food Day, The Lower Ninth Ward Food Access Coalition (a project of the Center for Sustainable Engagement and Development) took a stand for food security by hosting a “Grocery Store For-A-Day” event in the parking lot of All Souls Church and Community Center. The festival included live music, cooking demonstrations as well as a “pop-up” grocery store, and brought attention to the Lower Ninth Ward’s food desert status while raising money for the development of a mobile grocery store. The program was an incredible success, bringing widespread attention to the issue of food security and hundreds of people to the makeshift grocery store to celebrate. Mitchell Landrieu, the Mayor of New Orleans, even proclaimed October 20th “Lower 9th Ward National Food Day,” affirming the CSED’s hard work. 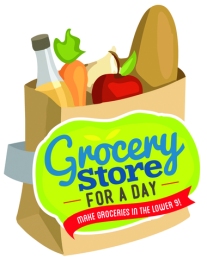 Renee Peck (via the Times Picayune) 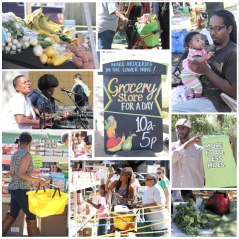 In 2009 the USDA found that 23.5 million people lacked access to a supermarket within a mile of their home and a nationwide analysis found 418 rural “food desert” counties where all residents lived more than 10 miles from a supermarket or supercenter, accounting for 20 percent of all rural counties. Another multistate study found that eight percent of African Americans live in a tract with a supermarket, compared to 31 percent of white Americans.

In the Lower Ninth Ward, the nearest full-service grocery story is about 3.5 miles away in St. Bernard Parish. According to Lower Ninth Ward activist Jenga Mwendo, about 30 percent of residents lack personal transportation, making a trip to Walmart in the neighboring city of Chalmette that much harder.

“If we had a grocery store it would be a catalyst for other economic development in our neighborhood,” Mwendo told the Times Picayune. “Given we lost about 75 percent of our population after Katrina having something like that would help bring people back and bring in new residents.”